Cyantific is no stranger to releasing albums. With previous long players released on the prestigious Hospital records & Viper Recordings labels he’s got definite form in the art of laying down albums.

He’s about to release his 3rd studio album Discovery Vol. 1, so we decided we needed to sit down with the man himself & find out more….

First things first, how are you? It’s been a strange time for everyone involved in the music industry over the past few months. How’ve you been coping?

Is it weird to say I’ve sort of enjoyed it? I feel like it’s been useful as an artist to reset and take some time away from DJing to focus properly on production. I mean I really miss playing out, but I think there’s been some real long term benefits, it’s been a time to reflect on what I’ve done so far and to look forward to where I want to go

Has making music been a good distraction from all the craziness going on in the world right now?

Definitely. What I would say is that I live in a bubble where I was producing all day before any of this happened, so not a great deal has changed. After the initial 2 or 3 months of accepting life was different, it was pretty much back to normal for me (minus the DJing). I spend practically no time on social media or reading the news, I get it all from friends and family

Talking of craziness, one of the most unexpected collaborations of the year happened earlier this year when you & Macky Gee teamed up for a track on his album! I wouldn’t have put you 2 together, how did that link up come about?

We were very very drunk at a show in Holland. I can’t remember who came up with the idea. Macky said he had a load of my old releases from the Hospital days, I do remember that much 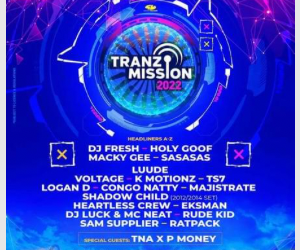 I can really hear both your styles in that track, it really worked. Will there be a follow up?

We actually did another track as well that’s almost finished, I prefer it, but Macky loved the one he put on his album, so it’s gonna work out quite well I think. I love Macky, he’s one of the most genuine people in dnb, and working with him is always entertaining. It’s good to work with people from the opposite end of the spectrum, fans get something different and you both learn something

Tell us about the album, Discovery Pt. 1. How long have you been working on this?

I started it in March, and just completed it about 6 weeks ago. It wasn’t really a plan as such, it just seemed like it would work well after I’d done the first couple of singles. I’ve made a load of changes to the way I work this year which has meant I can complete music a lot quicker. So I thought a good way to present an album would be to do it in 2 parts over the course of 18 months, so you get a good run of singles and a bigger project all in one

Discovery is also the name of your label. When you announced the project back in April you said Discovery is about challenging yourself to experiment. Do you feel experimentation is missing in drum and bass these days?

I think it was missing for me, but there’s a new generation of producers who are making some really interesting stuff. As I was saying before, I think this time off from DJing really made me think about how crazy the late 90s were for experimentation, and made me wonder if I could bring that back into my music. Not the sound of the late 90s, but the nature of experimenting. Because the pressure is off in terms of feeling like I have to ‘smash it’ with no shows to play at. I’m not sure whether I’ll ever go back to making more upfront music, it’s hard to say at this point

Someone recently told me they thought drum and bass producers had sacrificed rawness & sonic experimentation, in favour of technicality & loudness. Would you agree?

Drum & bass is a fine balance between the two, and always has been. Some people are more at one end of the scale or the other end of it. I don’t think I have the patience to go full on technical. I just want to get my music to a level I’m happy with then move on as quickly as I can. Vibes for me are the most important thing, a clinically produced average idea is doing nothing for anyone in my opinion

Vibes for me are the most important thing

You’re releasing Discovery Pt. 1 yourself. Having released your previous albums on some very established labels, how has the experience been of essentially being your own A&R man?

It’s weird, because you can’t be truly objective about your own music until it’s been out for some time. So I guess in this case time will tell. All I would say is that I believe in what I’m doing, and hopefully other people enjoy it. A&R can be absolutely vital at times, but I do think pushing yourself to take risks and release weirder stuff than you’re comfortable with, without the safety net, is a good thing

You recently moved studio spaces. How much of an upheaval is that for a producer? Does it take a while to adjust your ears to new surroundings?

It used to scare the shit out of me, the idea of moving studios, but this time I’m ok with it. I had to leave London because the house I was renting went on the market. I loved that studio, but accept that when you’re renting you’re always subject to the whims of the landlord. I actually haven’t even set up my speakers here yet as I just ordered a new soundcard and left the old one in storage

I see you’re planning to relocate to New Zealand. Is this all part of the Discovery project? New sounds, new surroundings, new countries?

It is actually, the two things are tied up together pretty well. I’d decided I wanted to move there back in January, then launched this project. It’s why all the artwork features places in New Zealand. It’s my main goal in life right now, to get over there and start a new chapter. I absolutely love the place.

Please assure me the move across the world won’t cause too much disruption to your monthly podcast! They’ve been essential listening for me a long time now

Thanks! No, if anything once I get settled I’ll be able to take on some bigger projects with the podcast etc

Cyantific Hangs Up His Headphones

Podcasts are a big deal these days, so much so that Spotify recently signed a deal with Joe Rogan to exclusively host his podcast...
Read more
Advertisement